Does it always pay to be nice?

I was always raised to be friendly and polite. I hold doors open for people. If strangers bump into me I say "sorry" and I always make sure I give a little wave when someone lets me out in the car whilst driving. I have raised my children to be the same. They say thank you and please. And smile when introduced to new people.

But recently thoughts have turned to raising them to be 'good' people is maybe doing them a disservice? Maybe I shouldn't raise them to be polite and kind. Maybe in today's world that's just not the right way? I'm worried I'm setting them up for a fall. Perhaps nice, though the right way, isn't always the most effective?

Recently I got called a "bitch" when not letting a man out as I was in a rush to pick the kids up. I wound the window down and said in a bit of a middle class voice "that's not very nice" and you know what he did. Called me a prick and stuck his fingers up at me. What a gent. I drove off quite upset. Confused as to why a stranger would speak to someone like that. 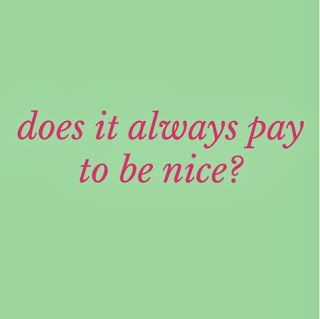 Last week I went shopping with a 3 year old and a 14mth old. Tricksome in itself. Someone stole my parking space, moaned as my girl wept because she had bumped her head, shouted as they had both made a mess when they ate, then pointed out when my boy (or "that kid" as he was referred to) started grabbing things. Like you know kids do? And I cried. I actually stood in this huge department store and wept. Weeping out of anger. Weeping out of sadness. Where is the love people? Where is the support? No one stopped to ask if I was ok.

Perhaps I should bring up my children to be cold and unhelpful. Rude and impolite. Then they won't get hurt when people shout at them or will be able to retaliate if kids are mean at school. They would get the best parking spaces. And have no issue with swearing at strangers who are daring to go about their daily business.  Maybe tough and hard is better than kind and soft? Maybe that will make them succeed. Get ahead and not find themselves sobbing in shops.

We always say "do good sharing" but as we get older it's apparent that people don't do good sharing. That adults aren't great at the concepts of fairness and teamwork we try to instill in our toddlers. It's often those that don't share and think only of themselves that are the successful ones in business. That rise to the top, by trampling on others as they go.

Should I start to introduce my children to the harsh realitys of the world. Prepare them for what's ahead? Toughen them up so they don't get hurt as adults. I just don't think I can. I think I'll continue to try my hardest to help them travel along the right path. And just make sure that I'm there when it inevitably gets a little bumpy.