If you're like me, sometimes you need a little break from the monsters. I mean children. And I have no issue lovingly palming them off to my husband. Their Dad. In fact I often ask him to 'babysit' them (why we have to ask them to babysit them but children are just left with me I'll never know). But when kids are with their Dads, there are few things that you have to accept will inevitably happen if he has them for more than an hour (that hour will be spent watching Peppa or building a tower he wants to build, not them). 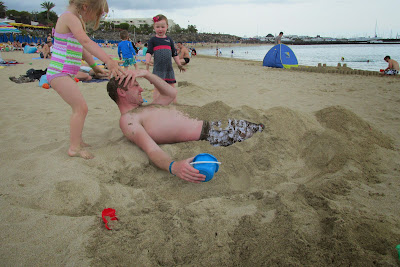 Come on! Cover me in sand!

Plan B: He will take them to the park/soft play/anywhere that is not our house
Dads are the king of the park, they rule the soft play. And this is because at their very heart they are still 3. Think back to the last time one of yours got stuck at the very top of the highest slide? Dad will "volunteer" to get them doing some sort of police cop roll on the way up. The sign which says "adults are not allowed in the ball pool" should read "Dads are not be allowed in the soft play, you are over six foot and too old for this sh*t".

The child will be fed on crap
There will be no picnic lovingly prepared by Dad. Dad will not fill a snack pod. What's a snack pod he will say? Who needs a snack pod when you can buy a grab bag of Quavers? Dinner will be McDonald's/KFC/dirt burger from the soft play establishment. Drinks will be fruit shoots or you know what? I bet they give them Coke. But there is not way on gods earth my husband would confess to that. Snacks of raisins will be replaced with. Cake. Cake and Coke. 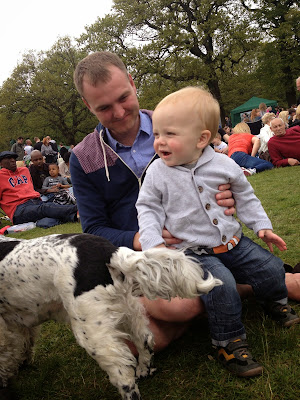 Naps. Who needs a nap?
You call from your day out. "Have they had a nap?" you ask. Oh fuck, they think back to the whole day of eating crap and playing and getting filthy. Did they nap they wonder???? YES! They did for three minutes in the drive through at Maccy Ds. So they confidently reply "Yes of course they napped. Do you think I'm an idiot?".

All household chores will be forgotten
When I am at home. I'm doing a million different things from looking after the children, to changing the beds, to polishing (urgh) to just generally tidying up crap. Dads? Don't do this. I have often returned to my children sat on a pile of 15 mixed jigsaws or somehow mysteriously the washing pile has grown ten fold. I am never sure how this has happened. I don't ask. 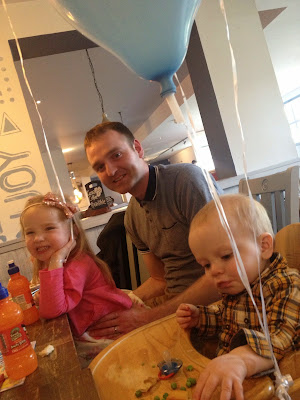 They will bang on about it for weeks
"Do you remember when I watched them for you" "Don't know what you're moaning about, it's easy" "I watched them for that day two months ago remember?". They bang on and on about it. Like they deserve a medal. All because they looked after their own actual children. For a day. Where either their Mother really did it or Mr Ronald McDonald.

But ultimately as much of a ball ache it is when you leave your kids with their Dad. And how the housework triples and there are non descript stains on the children's socks. My children bloody love a day with their Dad. They go to bed dirty and happy, albeit it at midnight due to secret Coca bloody Cola.