With a three year old girl I am used to my house being choc-a-bloc with stickers, princess stickers, Minnie stickers, stickers on the sole of my slippers, stickers wet and wrecking washing that comes out of the machine. But there is a new sticker in town. It's a big retangular sticker. And it has random men's faces on. Some are shiny. Yes. It's that time again. The time I have taken to calling "for gods sake that bloody sticker album". The Official Fifa World Cup Panini sticker album which has turned my husband into a man possessed.

Let's clear this up. The hub is not a 'young Dad' who could be forgiven for popping down to the local shop every night to spend 50p on stickers. No. He is in his 30's. He is a quantity surveyor. He is also a man obsessed. He now uses words like 'swapsies'. He has a spreadsheet with lots of sticker numbers on, which he ticks meticulously and he has also said "this time round I am going to complete this bad boy". And I kid you not. He sends me into my work. With his extra stickers. To 'swap'. Nooooo not with my pupils. Don't be daft. No, with the other male members of staff who are in their 30's collecting the stickers and no doubt driving their partners mad too (shout out to the man who has a special case to carry his in - you know who you are). 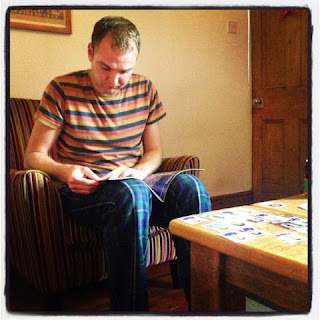 And you know what's worse? The World Cup hasn't even started yet!!! Not until the 12th June. So what the hell is he going to be like during that month? Well I know. After ten years of being together we have seen a few World Cups. And he ignores me. That's right. For a month? I am invisible. He explains it like this "imagine, a month of non stop Sex and the City - you would ignore me right?". Well probably yes (and thanks for the totally out of date reference) but that's not the point.

But this time round it is different. We have children. There are two of them. They are very small. And will not be sitting through endless boring football matches. There was already a hairy moment when the girl carelessly ripped into one pack of stickers and the husband raised his voice (now I have seen the girl punch her brother square in his face and try and smash stuff up, no voice was raised then). I have the 'child card' and I am not afraid to play it. Heed this warning my love. I am a World Cup Widow no more. And if you do ignore me and our children solidly for a month. I have a brand new pack of felts for the girl. And she will be looking for some paper to draw on. I know where you keep that bloody sticker album. And I'm not afraid to use it.