The Lost Art of Conversation

There was a time when I used to, you know, like to talk to my other half? About actual stuff. I remember nights where we would chat for hours on the phone about everything from religion, to who we thought would win Big Brother 3, to politics. OK. We never talked about politics but let me have my dreamy remembering scene.

Now? We don't talk. And if we do talk? It's about washing or conjunctivitis or him not letting me have a guinea pig (curse you man!). Our discussions are about school places and our idle chatter is about whose turn it is to go and watch the girl do her swimming lesson at stupid o'clock on a Sunday morning. Is it just me? Please tell me that this is normal? That conversation just kinda stops as one gets older or busier or just plain tireder.  Our communication now comes in the following ways:

The Gritted Teeth
You know when one of you has made the other SO cross but the kids are there and you need to maintain the illusion that you're not cross for fear of f*cking them up forever. Through gritted teeth you say "nope it's fine. No you're right you did take the washing out of the machine last time. No you're not P.I.S.S.I.N.G (spelt so tiny ears don't hear) me off at all". Only to be met half hour later with your 3 year old spelling pissing to your 1 year old 20 minutes later. A proud parenting moment. Ahem. 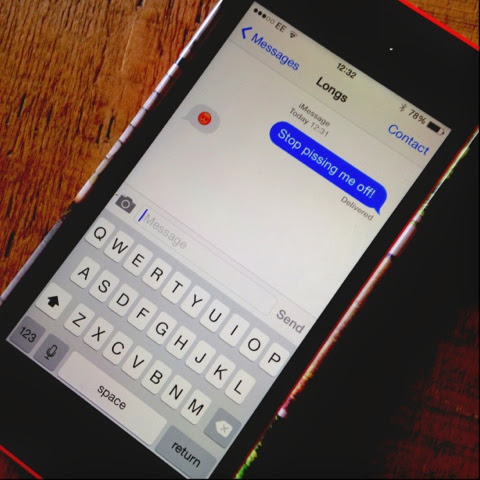 The Text
Ah the joys of text. Who needs talking when one can communicate to your other half through the means of 'the text'. A sad emoticon here or worse an angry one if something proper has gone wrong. Or the "please could you get me some milk coz I forgot" winky emoticon. Texts also can be used to grab that one spare minute a day to show your true feelings which may include love but more often than not spell words far worse than pissing.

The Serious Decision Chat
"Now we really must talk about getting the kids a bunk bed. Thoughts?" other half rolls eyes and continues to play candy crush. "It's time we took your car in for an MOT. Thoughts?" I roll my eyes and continue to furiously tweet strangers who I fancy most in Made in Chelsea (Stevie). Decisions made alone. With the inevitable angry text sent when they are wrong. If you're reading this hub? I'm opting for pink bunk beds. Screw you for your lack of interest.

The Date Night Dialect
You made it out! You make a rule to not talk about the children and talk about other hot topics. Mmmmm like war n sh*t. Then you remember you know NOTHING about what's going on in the world today so resort to showing each other funny photos of the kids and mega lolling about when the girl spelt pissing to her brother. Whilst making a vow never to do this again. You leave early. Back in bed for nine and your only chat then is "what shall we watch on Netflix"?

The Birthday Card
Ah the joy of the birthday card. I find this is the one time of the year I can guarantee on a bit of the old fashioned romance. We both try to make an effort to remember why the hell we married each other all those years ago. What was it we saw in each other before the lack of sleep and approaching our late 30's yuckness arrived. Same with anniversary cards. These little words I treasure. And whilst this is a conversation that only has two small paragraphs to each other every year. It means the world to me.

Come on people! How do you keep the conversation flowing?
In between reality TV and candy crush what do you talk about?
There's got to be more to life than conjunctivitis and bunk beds???
Share:
Posted by brummymummyof2
Labels: conversation, husband, marriage, me, wife
Newer Post Older Post Home