Am I Too Old For The Brits?

Something you may not know about me is that from the age of 14 to 18 I followed boy bands. You know those loons that sat outside Mark Owen's house? Or booked into East 17's hotel? Yeah that was me. Today I think the term 'stalker' may be used. We caused no harm and it was good fun. But there was one thing that we really looked forward to each year and that was 'The Brit Awards'. To us this symbolised a year in the life of the music we loved. We howled with laughter when the presenters were utterly crap, poised over the record button on our VHS when Take That were about to come on and said "what's she doing in it again?" when Annie Lennox was nominated for the 100th time.

I loved it. Every single second of it and tomorrow when The Brits is on the tele again I will sit down with a cup of tea (rather than Ribena), the Sky Plus remote in hand (rather than the world's largest video recorder remote) and enjoy the proceedings. Except I won't. As my music knowledge of 'modern' music is limited to Adele, Justin Bieber (as I have an unhealthy crush) and maybe a bit of Coldplay. But even then I would be pushed to name any of their songs past Yellow. I am officially past it. 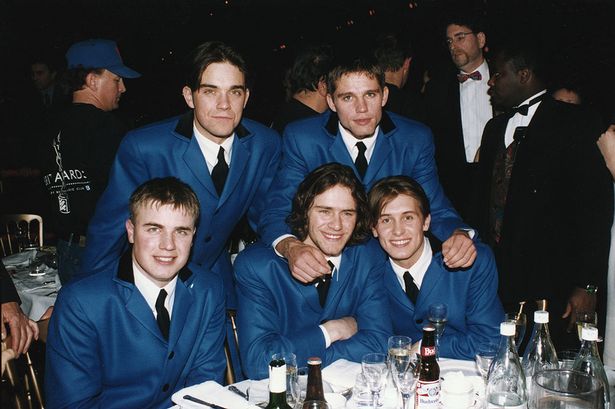 Things I can guarantee that will come out of my mouth are; "who the hell is that?" "what the hell is she wearing?" "I've never heard of him" and "remember when Sam Fox presented it with that one from Fleetwood Mac? Now that was a great year". My husband will look at me, nod his head and think "here she goes again". I will sadly pull up the Beatles medley that Take That did in 1994 on YouTube and play it on repeat whilst some humans called "The Weeknd" (WHERE IS THE E PEOPLE? IS IT COOL TO MISS E'S? Please refer to me as 'mma' from now on) perform.

I will probably text my sister laughing about when Jarvis Cocker waved his arse in front of Michael Jackson and will go to bed before the whole proceedings end. I will dream of bands called The Alabama Shakes, Tame Impala and Major Lazer. Who am I kidding? I will be dreaming of Gary Barlow singing and dancing in a too tight blue suit. Again. I suppose if I really wanted to I could listen to new music. I could turn off Swifty (which is about as up to date I get) and mute the musicals whilst I look at the Top 40 online.

Or? I could be happy in a world where I listen to songs from my youth that fill me with such joy that my whole body wants to explode whilst I dance around the kitchen. 90's music that makes me want sing loudly and reminisce about my old bedroom with posters all over the walls. Indie classics that remind me of snogging boys whose breath smelt of beer. And dance anthems from nights out where my friends and I wore tops with no bras. In the days before our knockers swung around our knees. So? Tomorrow I will reluctantly watch The Brits again...and don't tell my other half...but I shall enjoy a ruddy good moan for yet another year.