Once again the news is full of the most bizarre stories. This time about people who wear terrifying clown masks, hide and jump out at people to scare them. Maybe in a McDonalds, or one was driving around the streets in a mobility scooter. The first thought I had was "what f*cking maniacs" the second was "I swear to God if anyone jumps out at me and the children in a clown mask? I would punch them in the goolies. Hard". I am not a violent person. In fact I would rather the world sorted out all their problems over a nice cup of tea and a piece of cake. But when it comes to my children? I get VERY Peggy Mitchell.

You know. The kind of Mum that would pick someone up by the scruff of the neck and chuck them out of a pub for breaking their babies heart. It's not big and it's not clever but it's almost animalistic. It's an inner rage that is locked away so tightly but woe betide the person that hurts either of my kids. 99.9% of the time it is well hidden but it only takes a swift bonk on the head in a soft play for me to go "OI NO!" very loudly. And then I am shocked by the loudness of my voice, go all red and hide behind my cup of tea. 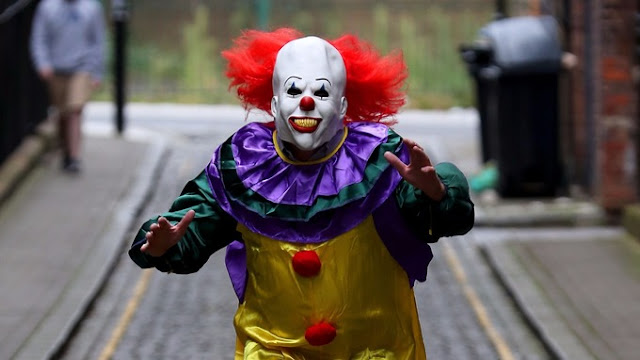 You better run as I'm going to kick you in the balls.

You hear that there is nothing stronger than a Mother's love. Tales of super human strength and you think "what a load of old b*llocks". But I remember a specific event when I was heavily pregnant and inadvertently got stuck in the middle of a fight in the school I taught at. My urge to protect my unborn child was like something out of a film. I remember actually picking up a 6ft Year 11 pupil to move him out of the way. On a normal day I would struggle to pick up a quite large pumpkin. I felt like I was one of the X-Men. A super hero Mum with the power of "KEEP AWAY FROM MY CHILD" strength.

There are other feelings that being a Mother has bought out in me that aren't so great. I want them to be treated fairly at all times. Sometimes I have to fight my inner urge not to be competitive and scream "GO ON MY GIRL" at Sports Day. I want the best for my two and there is nothing that will stand in my way to achieve it. I now totally get why Kris Kardashian is such a momager. She quite rightly wants her kids to do the best they can. And OK so she does it in a rather strange 'selling their sex tapes and doing nude photo shoots' way. But each to their own.

So this is a message to Killer Clowns. Yeah it might seem funny to scare people. And you may get your sh*ts and giggles from upsetting teenagers and elderly ladies. But you need to watch out. Because when you see a nice mild Mum with her two small children happily walking down the street. And you think "what an easy target this is going to be a piece of p*ss". Be wary as the inner strength of that woman can send you flying through the air with one bonk of a baby bag to your head and a swift kick of a Mum boot in your balls. Don't say we didn't warn you.
Share:
Posted by brummymummyof2
Labels: Motherhood
Newer Post Older Post Home