Why Mum Squad's Are Better That Swifty's (Probably)

Sometimes I look at Taylor Swift and her 'squad' and get envious. I see them prancing about in the sea in matching American flag bikinis showing off their amazing figures and gorgeous boyfriends. They take instagram shots where they are mega lolling at some hilarious joke Swifty has said whilst fireworks go off in the background. And I think "I want me some of that!". I want to be part of a huge squad who play out their amazing lives on social media. But I've found as I've gotten older my squad has dwindled and it's nigh on impossible to get just three of us in a room at the same time.

It takes military precision and even then someone's child (and it's generally mine) will get croup, chicken pox or will smash their head open on a Boot's make up counter (true story) and your much longed for night out is cancelled. And you have to go back to the drawing board to find another date where childcare can be arranged. It's frustrating and I have had the odd sob to my other half about how things have changed since I was footloose and fancy free in my 20's. 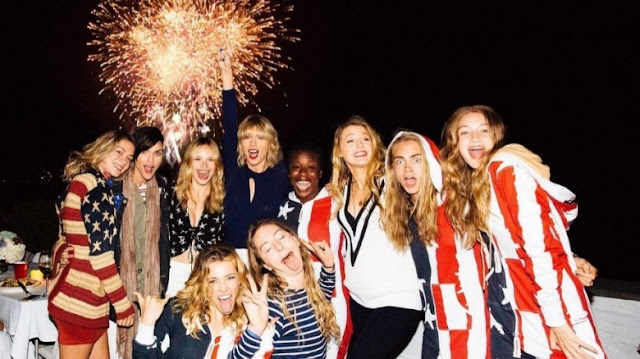 Nights then were spent downing shots, dancing on bars and not caring how I was going to get home. Laughing hysterically at in jokes and chatting up inappropriate men. I'm sad I will never be able to instagram the body I had then. But in reality was my 'squad' better back in the day? As I've gotten older I've definitely found that it's quality over quantity. I know that if I had a 40th birthday party there would be a 10th of the amount of people that came to my 21st. I would struggle to fill my living room let alone the massive hall I hired then.*

But what I could do is fill a couch of women who have seen me at my utter worst. Have held my hand when I've cried over poorly children, or have sent me care packages when I've been laid up with morning sickness. Have checked in every day when I've had problems at work or at home. Have sat with me, not in Union Jack bikinis, but in dressing gowns and Matalan pyjamas. My squad may not have a patch on Swifty's but it is small and mighty. And I could promise we would never fall out over Justin Bieber (but we would totes have inappropriate conversations about him). 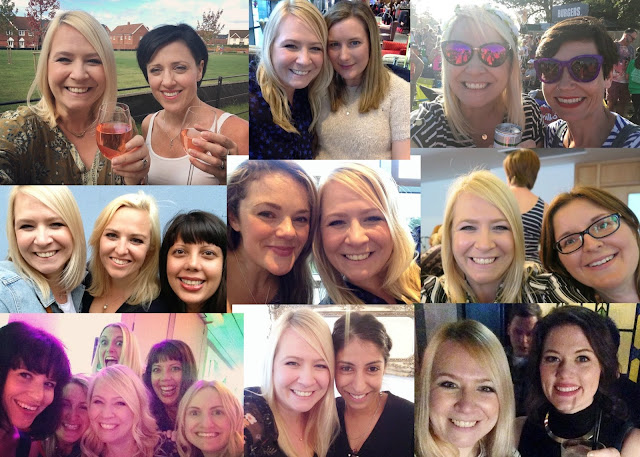 As I've gotten older my friends have become my rocks. There is an understanding that we are highly likely to not make it out very often. When we do someone will generally cancel. We know that Skype conversations will probably be done whilst bathing small humans and an idea of a fun weekend away may involve a trip to Peppa Pig World. If one of them said "Hey come to the Hamptons for a week and we can frolic in the sea with Ryan Reynolds whilst we instagram ourselves doing peace signs in front of fireworks". I would have to say "No. Sorry bab I've got to go and watch my daughter's Harvest festival show". And they would say "OK" and totally understand. I'm not so sure that Swifty would.

*side note I wore a suit with a bra, got so p*ssed that I fell over and it split right up the arse. Hardly Posh Spice.
Share:
Posted by brummymummyof2
Labels: Motherhood
Newer Post Older Post Home