With the arrival of the iPhone 7, which appears to be getting rid of headphones all together, it got me thinking. About the other things I grew up with that I feel made me the rounded human being I am today. Items from my youth that my children will never experience or feel the joy of. They are growing up in a world that would have BLOWN MY MIND. If my Dad had gone "Em you don't need to plug these headphones into your walkman. It just works!". I would have popped my Kylie Minogue cassette in and looked at him as if he had lost his mind.

I remember very clearly when our school got its first CD Rom. We all were summoned to the 'computer room' and stared at penguins on the screen gobsmacked. If we had seen actual moving images or knew we could google 'Mark Owen topless'? We let's just say I wouldn't have passed any GCSEs. So here are the ten things I loved about growing up and that will be sadly missed from my own children's lives.

Smash Hits Lyrics
One of the highlights of my youth was 'Smash Hits'. I LOVED everything about it. From the posters on the inside which I plastered all over my walls (Matt Goss be still my beating heart) but the highlight for me? The lyrics dotted throughout. I loved it. I loved the fact that I could stand in front of TOTP (RIP) on a Thursday night at 7pm and sing along to the Top Ten because without the aid of the internet Smash Hits would be the only way you would know the lyrics unless you... 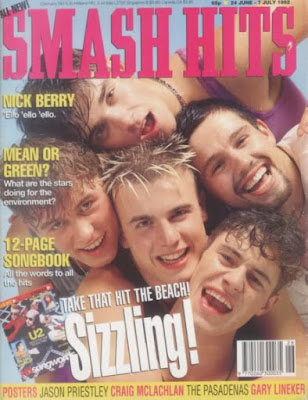 I am quite happy I couldn't just YouTube Take That videos. As I would have got NO qualifications

I used to stand there. At my 'ghetto blaster' and wait. And wait. And wait. And then 'VANILLA ICE IS ON PRESS RECORD NOW!!!' and record my favourite songs on a cassette. This inevitably meant I had a whole hours tape worth of 3/4 of a song with the local DJ's voice at both the start and end of the song but it didn't matter. I could now rewind and listen to the song 1367 times to write down the lyrics. And believe you me, if I had spent as much time on listening to 'Ice Ice Baby' and trying to write out the rap as I did on my dissertation? I would have for sure have come out with a first.

Live children's television
0818118181 I remember that phone number but yet I can't actually remember my own current home phone number. The utter joy of live television. The unpredictability of the phone callers. When Five Star got verbally abused on Going Live? Hilarious (oh and wrong obvs). And everyone talked about it at school as there was only a choice of two programmes to watch at the same time. Every week I would spend hours trying to get through on that bloody number. I did once. For Jason Donovan. I didn't even really like Jason Donovan.

Penny Mix
It used to be possible to have 10p and go to the shop and buy a 'penny mix'. And sometimes you could get two sweets for 1p! Now when I send my husband out to buy the kids a little treat of a 'penny mix' he can't even get a Chomp for 10p. A penny mix is now a £1.69 mix. And it makes me fume and moan every time. 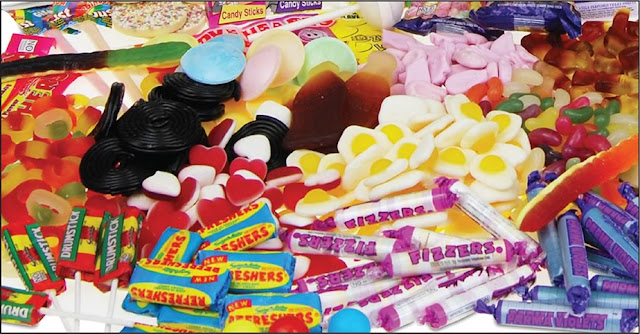 YOU COULD HAVE GOT ALL THIS FOR 10P! (Probably)

Pen pals
I had a host of pen pals up and down the country. And I bloody loved writing to them who I fancied that week. I loved covering the envelope in stickers and putting sellotape over the stamp to try and get one over on the Post Office. I probably used the same one stamp for 2 years. There was non of this weighing malarky. You could ram an envelope full of Robbie William posters and spend 26p and it would still get to it's destination.

Playing out
Now this makes me proper sad this one. 'Playing out' was one of the best things about growing up. Hanging around the streets with the local kids, roller skating, chatting, playing ball. And you would only come in when it was too dark and too cold to talk about Five Star being verbally abused on live television any more. The thought of my lovelies playing out night till it is dark? Terrifies me. I get worried when they are in the garden.

Terrestrial Television
I grew up on four channels. You knew that at 5pm you would have to endure a bit of John Craven and then you would watch Grange Hill or Byker Grove. Or Blue Peter if your parents wanted you to be a vague bit educational. There would also be the odd strange children's drama that was terrifying like Chocky. Then you would settle in for Neighbours and Home and Away. Boom. Done. Non of these slick American tweens singing about love. No. We laughed at Jeff mans beard, got bored by Anthea Turner making Tracy Island and wished we lived with Pippa and Tom and had Sally's huge boobs. 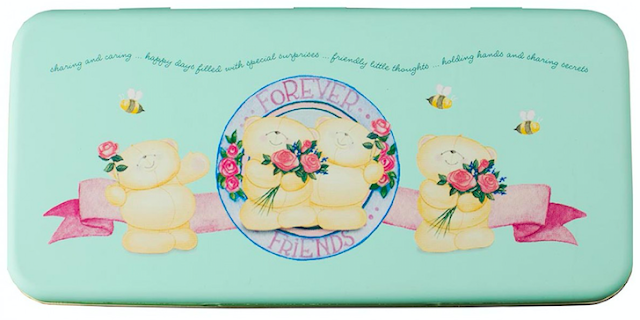 I loved Forever Friends more than a teenage girl should have

Pencil cases
I am a teacher. And past the age of 11? Children do not tend to bring a pen to school let alone a long lusted after Forever Friends tin pencil case you lovingly picked over the summer holidays. Or when you got a bit older a plain pencil case you could write 'I LOVE GARY' on or try and be trendy and write something about the Wonder Stuff when in reality you loved East 17. I often ask my pupils about pencil cases. They mock me and say they have something called 'a pocket'.

Tuck shop
There was a time when schools were just in no way shape or form healthy eating. Burgers, pizza, cornflake cakes, pop. And tuck money? One of life's greatest joys. You would take your dinner money and do one of the following 1) buy a bag of sherbet before you even got to school 2) work out how many cornflake cakes you could get 3) buy 5 bags of pickled onion Space Raiders or 4) when the World Cup was on buy World Cup cards and no food whatsoever as you fancied Gary Lineker. No dinner money cards or Yum Boxes lovingly packed with healthy bits and bobs. Nope. Just pure sugary or onion flavoured sh*te. Ace.

Advice
Our advice about things all just seemed a bit daft didn't it? From the 'Charlie says' don't speak to strangers ads or the poorly acted crossing the road ones. Even Zammo on the drugs. No-one really took it seriously. Now I feel I am forever banging on about stranger danger, or don't trip over in soft play, or shoving helmets on heads on scooters in the garden which I won't leave for fear of my daughter being stolen. Best advice I got was from my head mistress who stated "when you walk up the stairs on the bus and you are wearing no tights men will look up your skirt". I still heed this advice to this day. Well if I went upstairs on buses very often as I get scared by youths. Or wore anything other than thick black leggings. 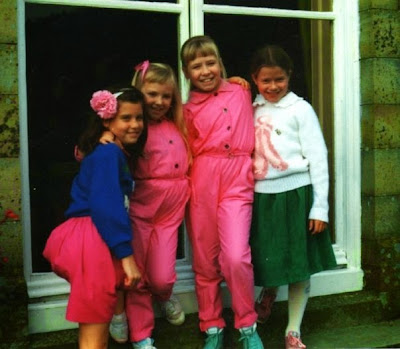 And yeah! We wore playsuits and hightops first.

OK so with hindsight our lives were a little bit more unhealthy and risky. But it makes me sad as we were free to be innocent. We could run around outside and eat crap and pretend to be Spuggy from Biker Grove, not some polished American beauty queen. Our little beauties will have to deal with social media and all the doom it brings with it, over worrying Mothers and super healthy school dinners. This does mean they will be a hell of a lot safer but they will never feel the joy of finally knowing the first line of Vanilla Ice without a DJ speaking over the top of it..all together now.."Alright stop. Collaborate and listen"...
Share:
Posted by brummymummyof2
Labels: humour, Motherhood
Newer Post Older Post Home