How to get your child's birthday card on TV!

So I thought I would impart a little story about something very important and relevant to parents up and down the country. And also offer some advice. Ease a little bit of stress. Prepare you for the day. The day that comes but once a year. The day, you have to get your child's birthday card on television or you will look like an uncaring mother and your child will weep. That day. And I say from experience, it is one of the most stressful days imaginable.

The preparation for this started two months in advance. Seriously. Two months! We looked at getting my girls card on Milkshake, CBeebies, Nick Junior and Disney Junior. Straight off. We were already too late for Disney Junior! Shit. So we had to do a three pronged attack with the others. Nick Junior was simple as you literally only have to send a photo. Boom emailed off. Done.

Next? The big dogs. Milkshake and CBeebies. We went onto their sites to look at what we had to do. We opted to make a Peppa and a Mr Tumble card. And being literally two of the least creative people on the planet. We struggled. We rowed for a good hour over whether to do Miss Rabbits bus or balloon. Like an actual row. By the time the Mr Tumble came to being done I just went alone to save fighting over Lord Tumble.

So the cards were sent off in huge jiffy bags (£5 postage!) and then we waited. The night before my girls third birthday I felt sick. Not sick with the excitement of seeing her opening gifts. Sick with the stress of if the card will be on. I had already set the sky plus to record both channels the whole morning. But that didn't stop me and the hub watching in between each programme like maniacs. Every time we would sit there doing that thing you do when you are a parent and you don't want your kids to know you are stressed but your voice goes all high. And you sound more manic. I was even sweating. Profusely. 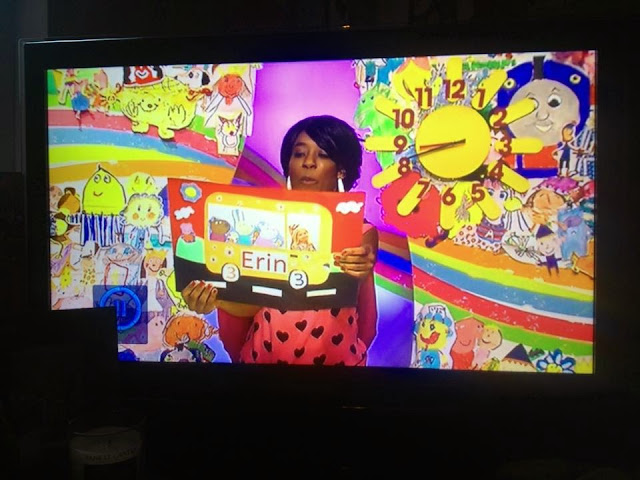 And then. At the very end. 9.45am. It happened. It really happened. On Milkshake. My crap Miss Rabbits bus card. Was on. IT WAS ON! I started hysterically screaming. Which in turn made the baby cry and the dog howl like a wolf. And I'll be honest the girl? Wasn't really arsed. BUT IT WAS ON! I am the best mom in the world ever! High five me. A did a little trot around the room. CBeebies rejected my Tumble card. Nick Junior rejected the picture but Milkshake? Bloody loved it. Boom!

So let me impart my getting a card on TV wisdom:

Here are the links to the special card pages:
And finally do me a favour. If your child has a birthday first week of December or first week of January. Please make them really really crap so I stand a chance again!
Share:
Posted by brummymummyof2
Labels: birthday, birthday card, Cbeebies, children, Disney Junior, Milkshake, Nick Junior, Television, TV
Newer Post Older Post Home