The Don't Beat Yourself Up Guide To (Not) Cleaning

Before I had kids I used to enjoy a clean every week. I would happily pootle around my house. Dusting the odd knick knack. Running the vacuum round once. And feeling happy and content when I lit a Yankee Candle. The whole process took an hour. Or maybe two if I decided to change the beds. And then? Kids came along. And I didn't own a tumble dryer and it was December. And I would weep as I hung never ending baby grows on all the radiators throughout the house. Every time I changed the sheets a small human would wee on it, a boob would leak on it and lest we forget the time my son sharted into my husbands eye and all up our brand new couch.

My house is NEVER clean. That's a lie. I clean mainly on a Tuesday whilst they are both out of the house. So it's clean for one whole hour. By clean I mean that the washing basket is still half full and the dog bowl is still filthy but at least I can see the floor. Then within three minutes of them returning? Yogurt is dropped on the rug in the living room, shoes are thrown around the place and I find crumbs in every crevice and raisins stuck to the bottom of every shoe. 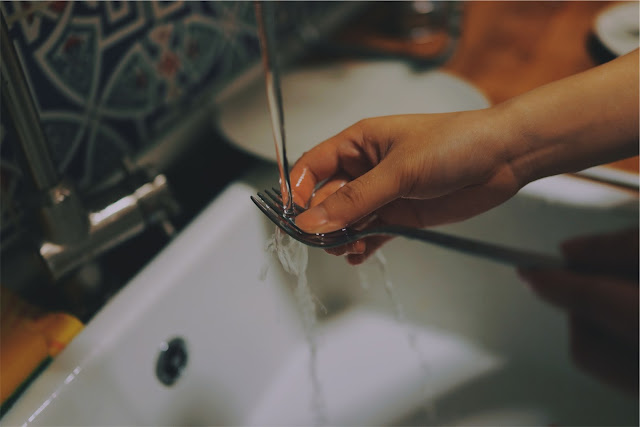 And it's not their fault. They are good kids. I have tick charts for tidying up and they do the best they can whilst being a four year old and six year old small human with the attention span of a gnat. Families come with a whole LOAD of crap. Seriously their is crap everywhere. Lego blocks lurking under the couch, sticky handprints on the mirror in my bedroom. And actual literal crap in looming unflushed toilets (and that's just the husband), dog turds in the garden and the rogue guinea pig ones I find dotted around. Where I can't quite establish if it is a poo or a raisin. Sneaky little buggers.

Cleaning is at the base of most of the arguments between my other half and I. Whilst we both pull our weight niggles such as my husband going "I AM GOING TO PUT THE WASHING ON NOW!" and me going "WHAT DO YOU WANT? A F*CKING MEDAL" can put a bit of a strain on things. And I've learnt over time that no amount of chores lists and dividing up jobs, can account for a random projectile vomit across the bathroom and a play doh explosion all over the living room rug. If I could afford it? I would get a cleaner.

But I can't. So recently I've kinda embraced that never ending cleaning is just part and parcel of being a parent. I've noticed that my standards have dropped. A lot. And when illness crops up everything has to just stop for a while. And that's OK. Family life is meant to be chaotic and the kids really don't notice the random oven glove that has been sat at the bottom of the stairs for a week. It's hard. It sucks but hopefully as they get older I will get my house back. I will also be able to finally stop inwardly screaming when my husband announces "I AM GOING TO PUT THE VACUUM ROUND". Like he has discovered the cure for cancer. The goon, flush the loo whilst your at it!
Share:
Posted by brummymummyof2
Labels: Motherhood
Newer Post Older Post Home